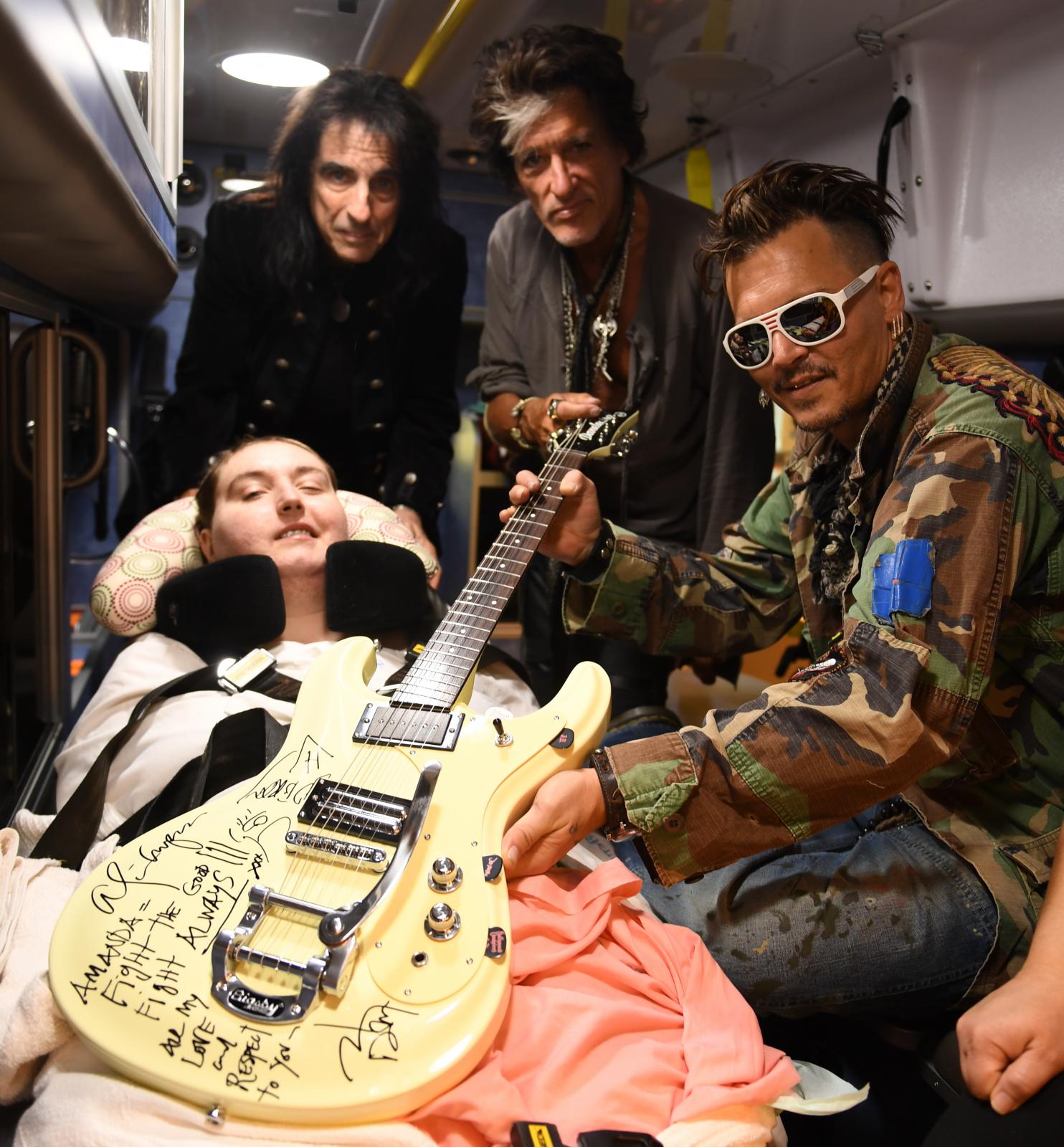 'It Meant the World to Me' 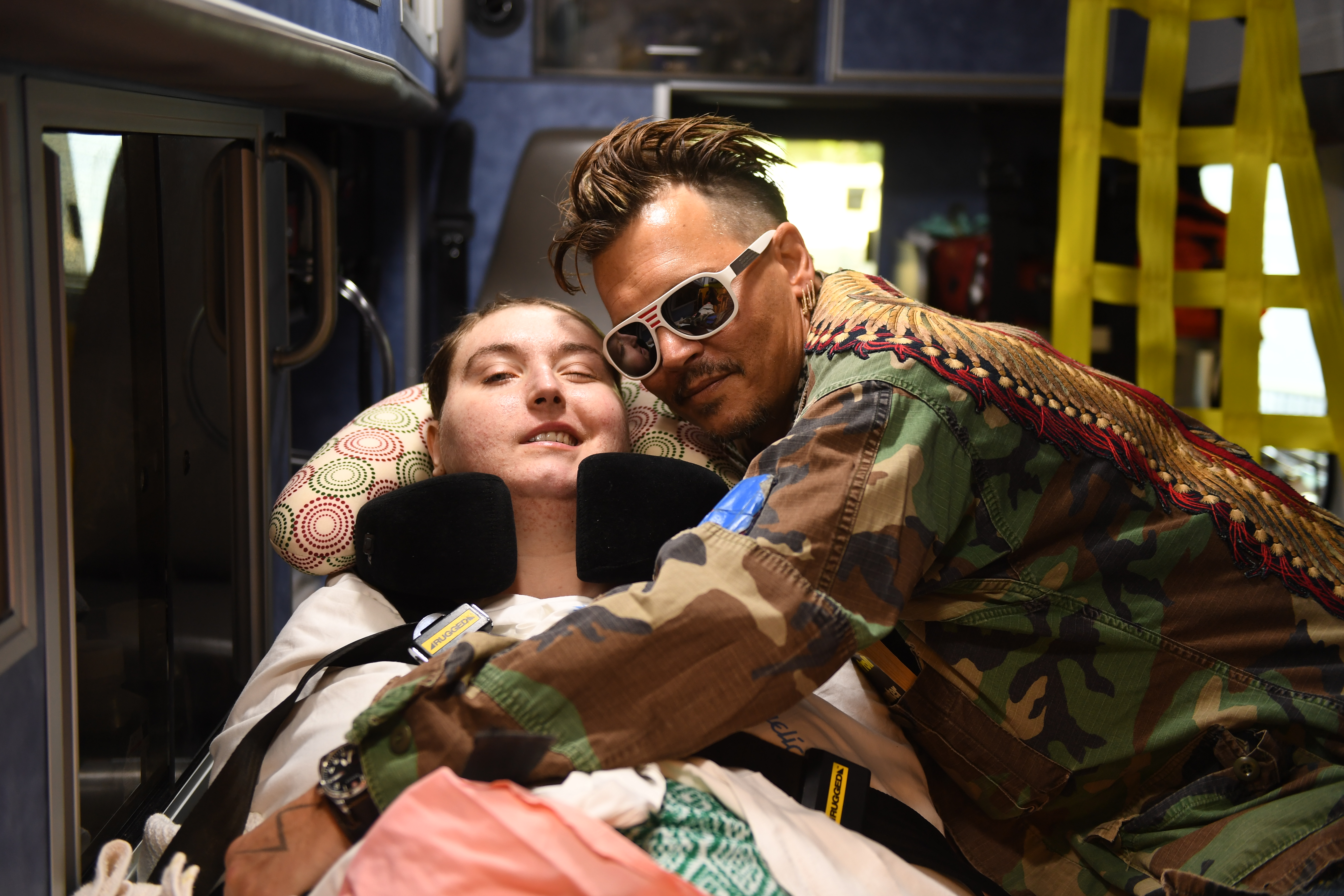 Johnny Depp Meets with Paralyzed Fan Ahead of Concert: 'It Meant the World to Me'

When Amanda Currie bought advance tickets last year to see her hero, Johnny Depp, in concert, she had no idea that she would be paralyzed from the neck down by the time of the show.

The 23-year-old Chicopee, Massachusetts, native was diagnosed with Stage 4 Glioblastoma, a type of brain cancer, in 2015 while completing her bachelor's degree in mathematics. Currie underwent brain surgery the day after her diagnosis, and was able to finish her degree and begin working toward her master's while undergoing chemotherapy and radiation.

Currie fell in love with Depp at the age of 10, and continued to admire the actor's work as she grew up. She's seen all of his movies repeatedly, collects all sorts of Depp memorabilia and sometimes refers to him as "love of her life."

So when her uncle, Chris Winslow, told her that Depp's band, the Hollywood Vampires, were doing a show at Foxwoods Resort Casino in Connecticut, Currie splurged and bought herself a single meet-and-greet ticket in April for the July 2 concert.

"Amanda was beyond excited knowing that her lifelong dream of meeting Johnny Depp would come true," her mom Kim tells PEOPLE. "But by May, Amanda's physical state declined and she had lost use of her legs." 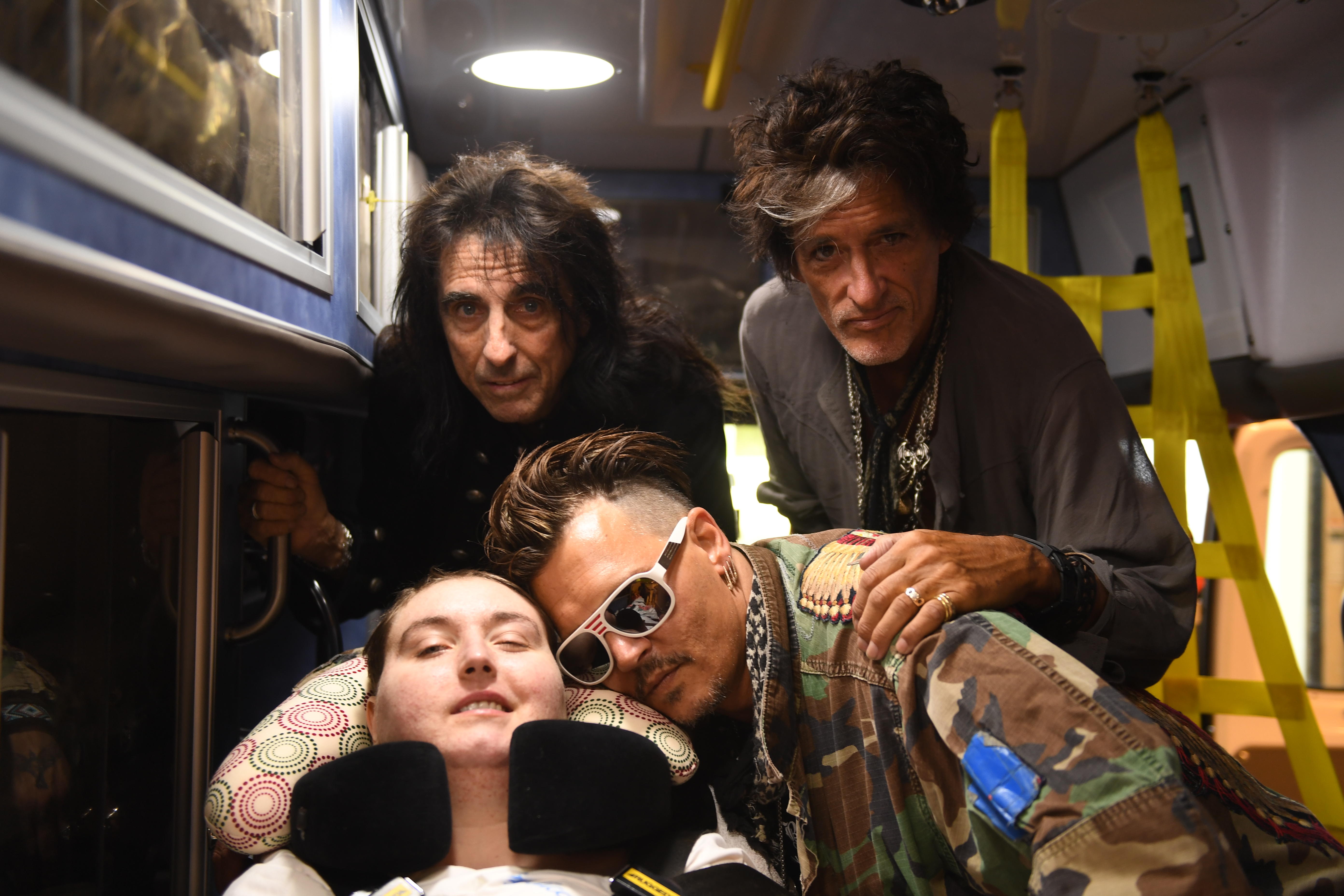 Her condition continued to worsen as the concert approached, and soon Currie was completely paralyzed from the neck down. "At that point we didn't know what to do or if she would be strong enough to go," Kim explains. "She knew it was nearly impossible, but continued to talk about it and count off the days. At one point she actually said she thought she could live long enough to go."

Currie's friend Tianna was determined to make that wish come true. With her help, a local ambulance company agreed to donate an ambulance and two EMTs to take her to the show. Meanwhile, Uncle Chris was working behind-the-scenes with the Hollywood Vampires to arrange for the band to meet with her.

When Uncle Chris and Tianna finally broke the news, Currie was beside herself with excitement and remembers shouting, "What am I going to wear?" 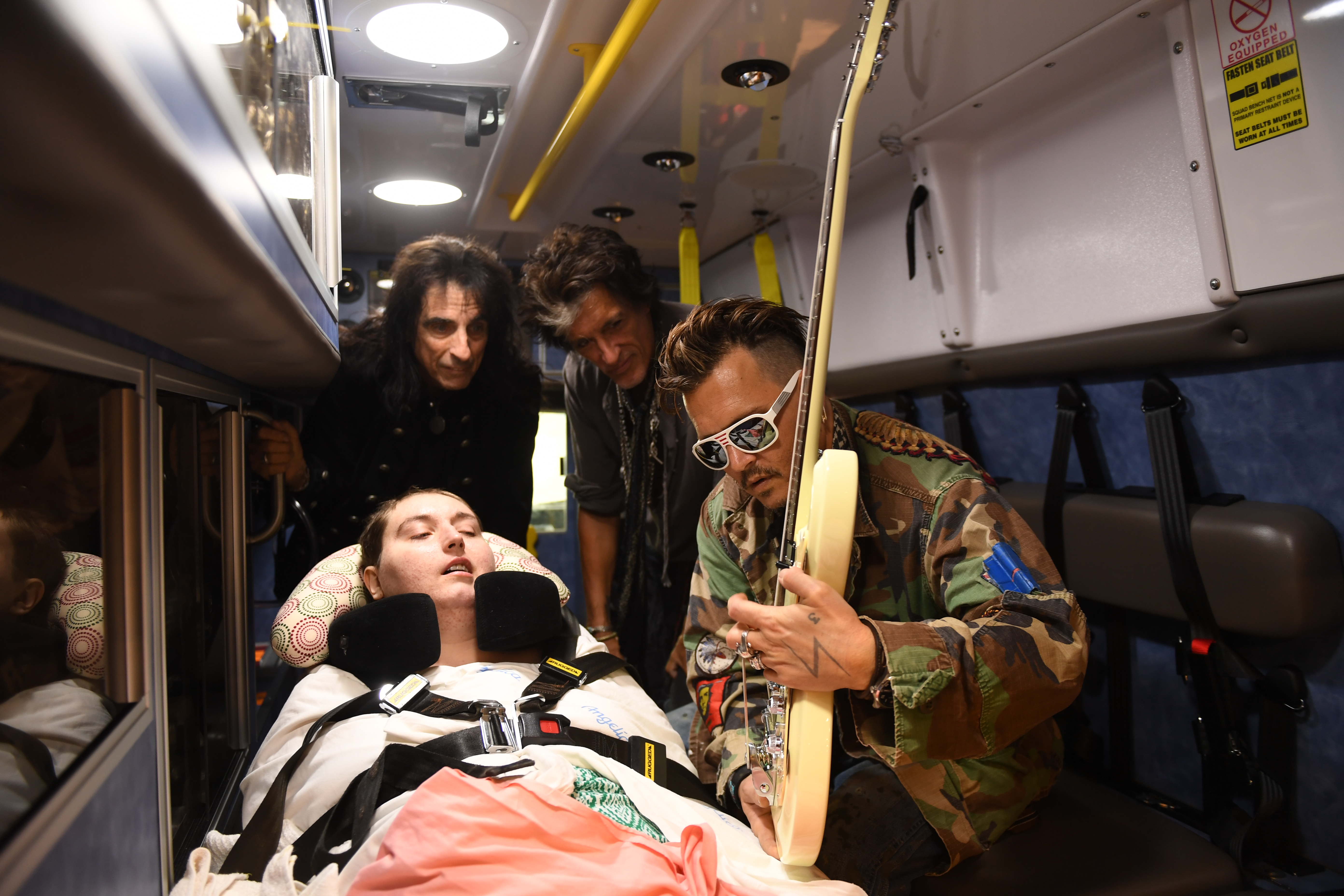 Before the show, Depp and his bandmates, Alice Cooper and Joe Perry, met with Currie inside her ambulance. Asked to describe what it was like meeting her idol after overcoming so many obstacles, Currie says, "It was wonderful, amazing and awesome. It was everything I ever wished for and more – the best thing that ever happened to me."

As for getting to know Depp, Currie says, "He was understanding and sweet and so hot! He is talkative, charming and funny and very down-to-earth. It was very exciting to meet him, a huge rush."

She adds, "The whole experience was magical. I still can't believe it's real, even though I have pictures to prove it. I will remember most how caring and sincere he was. He makes you feel special – you can't top that! He encouraged me to fight this cancer." 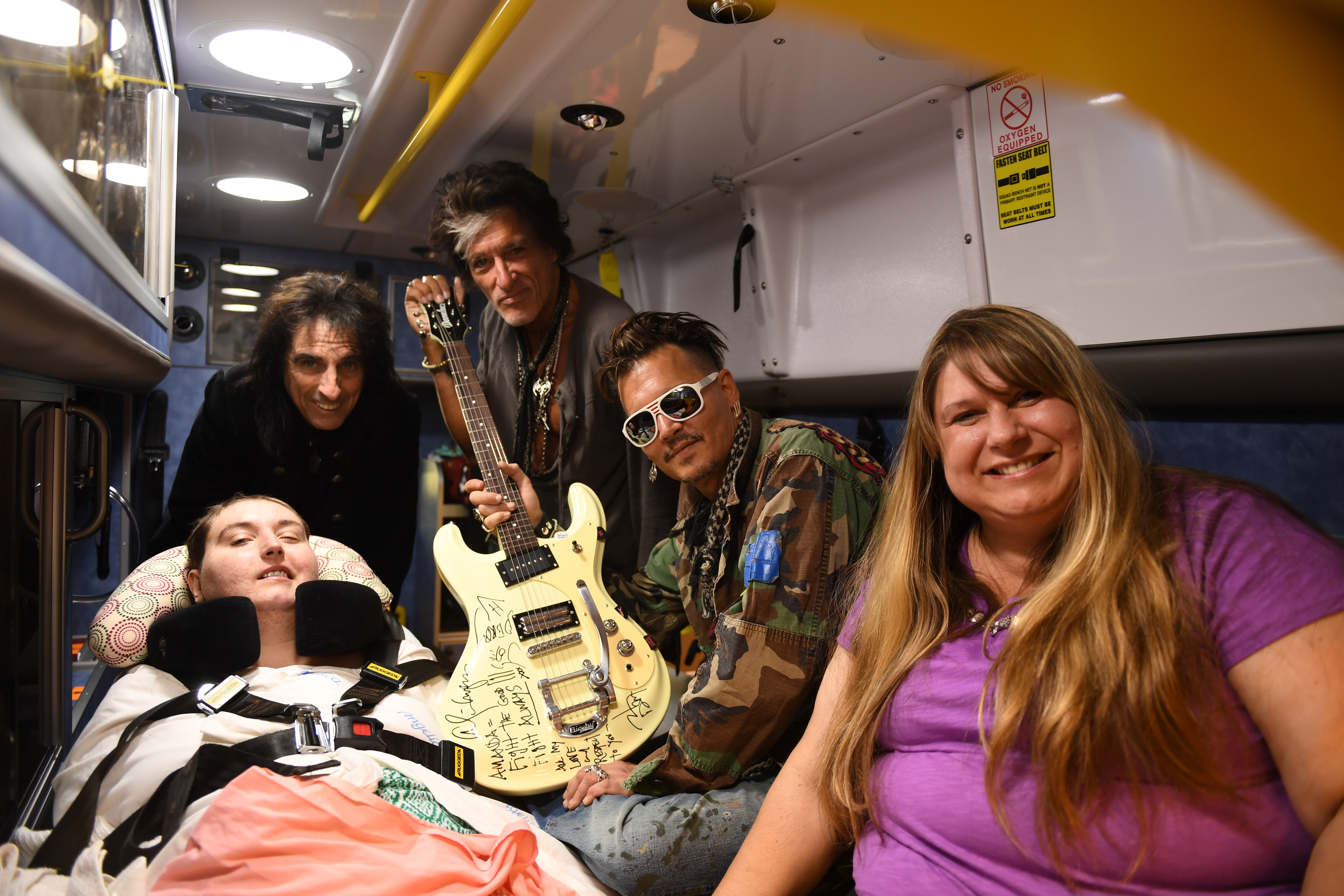 "That was the best day of my life," Currie says. "It meant the world to me."

Depp made good on his promise to hang out with her after the show as well. "What he said was my secret, and I can't tell you," Currie jokes.

She also made sure to mention that while she came to see Depp, "Alice Cooper's and Joe Perry's generosity, kindness and compassion did not go unnoticed!"

Currie will carry on her difficult battle with her illness, but she considers herself fortunate to have had such a rare experience. "I am very lucky to have had the chance to meet Johnny Depp," she says. "Many people have wishes and dreams, not everyone gets the chance to realize theirs in their lifetime."

For more about Amanda – and what you can do to help – visit her GoFundMe here.