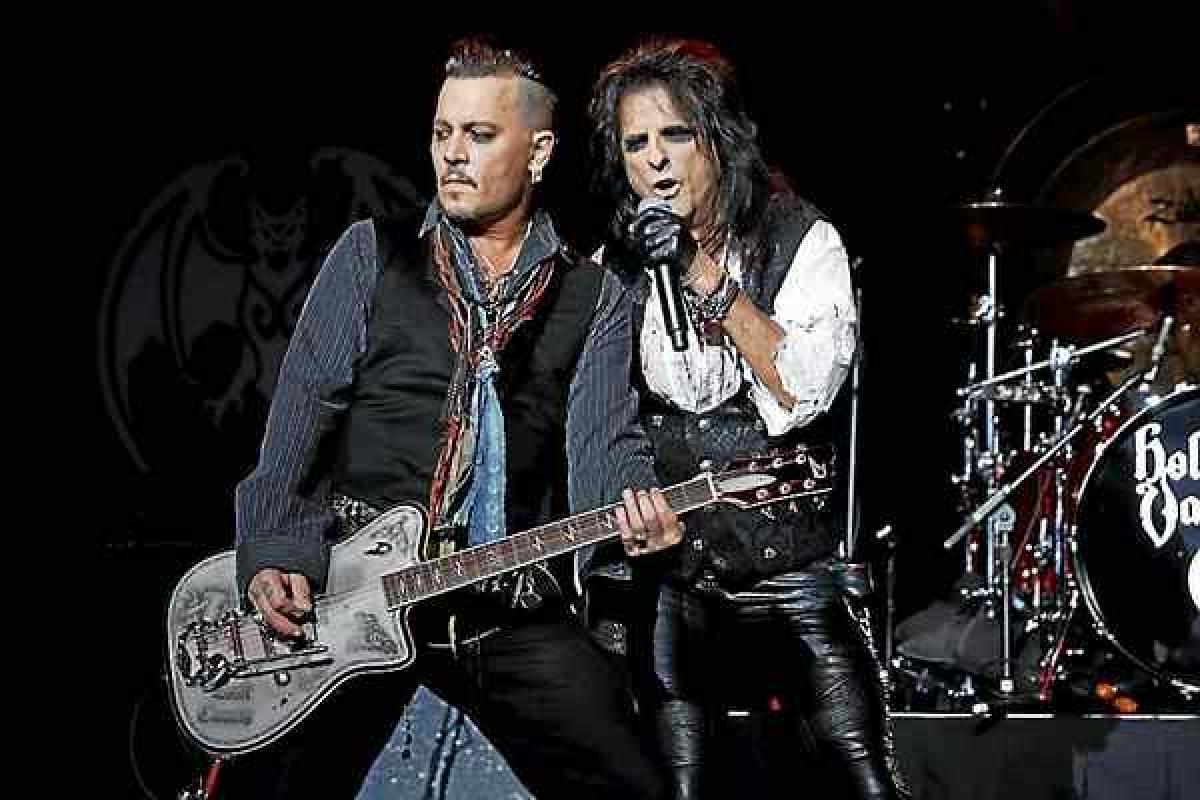 Review: Hollywood Vampires sink their teeth into classics at DTE

INDEPENDENCE TOWNSHIP - Daylight is supposed to be lethal to vampires. But The sun was still shining Saturday evening, July 16, when the Hollywood Vampires hit the stage at the DTE Energy Music Theatre, and it didn’t seem to prevent the all-star classic rock group from going for blood at all.

Fronted by Detroit native Alice Cooper and actor Johnny Depp -- with Aerosmith’s Joe Perry on the sidelines after collapsing on stage in Brooklyn on July 10-- the Vampires on stage were high concept with a bar band spirit. The group formed to pay tribute to the superstar drinking club based at Los Angeles’ Rainbow Bar and Grill of the early 70s; “Now they’re all gone. I’m the only one left,” Cooper told the DTE crowd. And the six-piece group, which also includes former Guns N’ Roses/Velvet Revolver drummer Matt Sorum and Stone Temple Pilots bassist Robert DeLeo -- did his “Dead Drunk Friends” proud, thrashing through 85 minutes of mostly covers, playing everything with a garagey kind of exuberance and an eardrum-melting sound mix that any heavy metal band would envy.

Perry was certainly there in spirit, too. One of his guitars sat on a stand in front of his amplifiers on stage left, while the band dedicated its performance of Aerosmith’s “Sweet Emotion” to him, with Cooper asking fans for a “Get well, Joe” shout-out. Meanwhile, regular Cooper band guitarist Tommy Henriksen, keyboardist-guitarist Bruce Witkin and Depp (who handled the Talk Box part on “Sweet Emotion”) ably covered for their missing Vampire, providing plenty of six-string firepower for a 21-song set list that covered the likes of Led Zeppelin, the Beatles, the Who, Jimi Hendrix, T. Rex, Motorhead and other bands that had members pass away prematurely.

Depp, of course, was the Vampires’ titillating draw -- though not enough to fill the venue by a long shot on Saturday. Some purists routinely dismiss actors who insinuate themselves in the rock ‘n’ roll world as a gimmick, but Depp, sporting a modified Mowhawk and Capt. Jack Sparrow makeup, played the rock star part convincingly, his guitar slung low across his calves and prowling the stage like he’s been playing sweaty clubs all his life. Depp also looked like he was having as much fun himself more than the crowd was watching him, even lingering on stage after the bows to soak in the moment.

And it was a rare chance for hometown fans to hear and see Cooper out of his theatrical comfort zone. He still dressed the part in makeup, an Edwardian longcoat and a blood-splattered white shirt but the guillotine stayed at home and Cooper clearly relished the opportunity to push his vocal range a bit, particularly on a medley of the Doors’ “Five To One”/”Break On Through (to the Other Side),” David Bowie’s “Rebel Rebel” and “Suffragette City,” Jimi Hendrix’ “Manic Depression” and a T. Rex pairing of “20th Century Boy” and “Bang A Gong.”

He also got to whip out the harmonica for the intro to a pounding rendition of Led Zeppelin’s “Whole Lotta Love” (sung by Witkin) and Aerosmith’s arrangement of Tiny Bradshaw’s “Train Kept a-Rollin’,” which featured former Romantics member Coz Canler on fourth guitar and photos of Perry on the video screen -- the only living rocker to be featured like that, which was a bit, er, eerie.

The Vampires also had their three originals to play -- the show-opening “Raise The Dead,” “My Dead Drunk Friends” and the unreleased “Bad As I Am” -- totally tore up the likes of Motorhead’s “Ace Of Spades” and Love’s “7 And 7 Is,” and offered up Cooper’s hits “I’m Eighteen” and “School’s Out,” both of which he noted were written in Detroit. The fun factor was certainly on the band’s side, and a spirited DTE crowd certainly had no trouble hearing all of those heritage classics played in the Vampires’ tight, ferocious form.

“If we didn’t do any of your favorite covers, it’s because they’re not dead yet,” Cooper explained during the encore. “But when they die, we’ll be here.” We certainly don’t need to lose any more rock icons, especially this year, but Cooper, Depp and company proved on Saturday that their legacies will be in good hands.